The Lovetones in New York 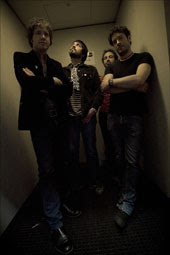 On May 1, 2009, Mr. Matt Tow and his band, The Lovetones, are playing a lovely little Manhattan venue called Pianos. This promises to be a very special show for anyone from the New York City area who loves The Lovetones like I do. I don't think the Australian band makes it to New York very often. For the recent release of their album Dimensions, they have planned a month-long tour for U.S. fans. The short tour does include 2 New York City shows, though, and I plan on going to one of them and posting a review and some photos here.
The Lovetones are just one of Matt Tow's musical endeavors. Over the years, he has created and produced music for his varied projects, from the experimental and stunning sounds of Colorsound, to The Lovetones' jangly, Lennon-esque, rock and roll. Most Lovetones fans will know that Mr. Tow spent some quality time with The Brian Jonestown Massacre, who themselves just took a tour of the U.S. In certain enlightened circles, The Lovetones are respected and loved, as they deserve to be. I feel especially lucky to be able to see their first gig of this tour.
If you only know The Lovetones in name or maybe just a few songs, check their lovely website for more information and their discography. 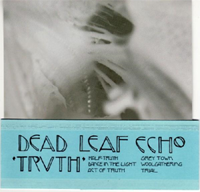 To paraphrase a very famous saying, Truth, the brand-new 6 song CD release from New York's Dead Leaf Echo, is most certainly beauty, and love, wrapped up in a swirl of shoegaze-style dream-guitar........the theme of the 6 songs is easy to understand: Truth, do you seek it? Is it even there for you to find? The more you want it to exist, and the harder you look, the more obscure truth becomes until it vanishes all together......
Awash in dreamy layers of sound, Dead Leaf Echo's songs do not follow an old tenet of shoegaze-style artists: let the words blend in with the music, as another instrument might do. Instead, LG's lyrics are understood to be as integral a part of Dead Leaf Echo's music as any guitar riff might be. Act of Truth, released ahead of the album, is the perfect song to represent the entire set of six: at once conveying longing, caring, strength, and the ongoing search for what gets lost between us but remains infinitely important to us.

Dead Leaf Echo on MySpace
Posted by Terri at 11:15 AM 1 comment: 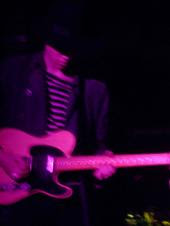 Garage rock & rollers Black Veil are in the process of getting their act together in my beloved city of New York. The roots of this band lay in Hastings, in a flat rented by Jack and Luke, where the two honed their skills learning Stones songs on the guitar. After mastering their idols' music from the 60s, and feeling confident and ready to take on the London music scene, they moved there to begin the hard work that comes with the territory of starting your own band. Lousy day jobs, lots of different band members, some different band names, all the usual dealings of an up-and-coming, do-it-yourself-and-keep-it-real band, were the early experiences of the boys in December's Children, the name they adopted so they could gig properly.
After, shall we say, many ups and downs, starts and stops, and more lousy flats were under their belts, the boys split up, Luke staying in London and Jack making a daring move to New York City. The young Englishman in New York is currently getting his musical act together with Black Veil, his new band. Worthy of the buzz in the garage-rocker's circle, Black Veil are currently recording an EP to showcase their roots-y, Brian-Jones-Stones-era-tinged rock and roll for us. I highly recommend you check out their MySpace songs, where you can hear Black Veil's simple and charming demos, some with lyrics, some intrumentals. I'll be updating in the future on Black Veil's whereabouts, doings, CD releases, and gigs I may get to see.
Posted by Terri at 6:19 AM No comments:

Labels: Black Veil, Jack, New York City
Newer Posts Older Posts Home
Subscribe to: Posts (Atom)
This blog's sole purpose is to bring some well-deserved publicity to new or less-known artists who fit the bill of 'new psychedelic, shoegaze, experimental, folk, and garage rock' music, through videos, links to MySpace pages and Band Camp pages of the artists, gig reviews, and through interviews with, and information about, the artists themselves. It is dedicated to Black Market Karma. Their music made me want to shout about it from the rooftops. But today, instead of rooftops, we have the internet & blogs, yeah.