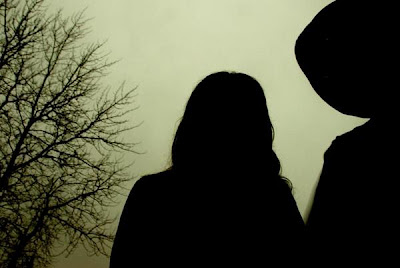 The music of The Radiation Line, from Stirling, central Scotland, is highly experimental, and quite psychedelic indeed. If psychedelic music is intended to extend one's mind into sonic spheres of ever-expanding, new and exciting states of expression and experience, The Radiation Line may lay claim to be the kings of this domain. Out of the six very limited edition EPs the group has recorded, four are sold out, but I was able to obtain copies of EP3 and EP4, thanks to James.
The Radiation Line's music is not for the faint of heart, rather, it is for those who love the sound of drone and how it can take you through to another level of consciousness. Many of the tracks on EP3 and EP4 use drone to pull the listener through the sounds. From EP3, Kommissar is sparse and spooky, yet the whispered vocals and light twang of guitar lend it an irresistible air of sexiness. The Mask Is Made of Flesh is thirteen minutes of ambling drones, dark and deep. Tourist (Part 2) changes the pace to rapid-fire prose which darts through a semi-electronic race of a song. Bella Victoria is a quiet end, with hints of the darkness which is the intriguing vibe of EP3.
EP4, here are the track titles: Lift Off, Now The Clouds Have Meaning, To Rot In Orbit, In Reflection of the Great Mirror We Knelt and Wept, As Heaven Was Revealed, Spiral. Get an idea of the ride you are in for? Scratchy, spaceship-style sounds and drones, long trips through wobbly space where your head wanders into the heights of the drono-sphere, are what make up EP4. James and Euan blur the line between inner and outer space brilliantly, as you can practically see the warping of everything real around you.
For those of us who love to experience experimental psychedelic sounds, The Radiation Line are creating some of the most incredible music we could possibly hope to hear. Minimalist, yes. Drone-driven music, yes. Fascinating new ways of twisting sounds into psychedelic trips for the music-loving mind, oh yes. Indeed.

Click here for a fantastic interview with The Radiation Line.

Photo courtesy of the band's MySpace.
Posted by Terri at 1:40 PM No comments:

Edrone, a song from their upcoming album, performed in Touchay, France: 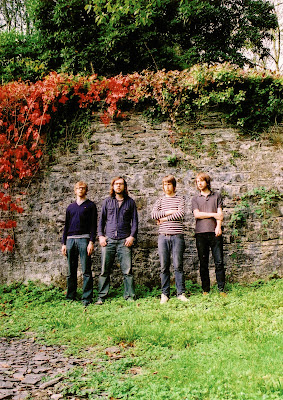 A wise friend of mine, a true lover of all music psychedelic, turned me on to Wolf People not too long ago. Tidings, the first real, accessible release from Wolf People, quickly became an obsession of mine, and it's easy to hear why, after just a sample, which, if you have not heard them yet, you can find here at their MySpace page player.
Tidings is an album made up of 7 songs, with many smaller interludes and fragments filling in spaces between songs. Sounding like it was made four decades ago, and making use of elemental natural imagery such as fire, water, earth, and air, Tidings' songs evoke much more than I could ever hope to explain, and that is what I am stressing here: if there is one album you need to experience this year, this is it. With songs that can sound catchy and jaunty, but at the same time, lyrically be a bit dark, about soldiers, knights, and burning displays of fire, Tidings is nothing short of a brilliant, psychedelic masterpiece. There is so much to uncover with repeated listens, beyond the initial charms of the upbeat tunes with the snazzy, jazzy guitars and accents of unexpected little surprises like the ting-ting of tiny piano keys.
Wolf People is a four-piece with Jack Sharp fronting the band (guitar and vocals), Tom Watt on drums, Joe Hollick on guitar, and Dan Davies on bass, all late 20s/early 30s of age. Though most of Tidings was written, performed, and recorded by Jack as home demos, now the band is hard at work, together creating the songs that will make up their next album, and they have a few performances on their gig calendar, if you are in the UK and can catch them live. Jack took some time out of his very busy schedule of recording, to do an interview for me which I am quite pleased to present to you now. This gives some great insight into an amazing band's work:

Terri: What is your musical background and how did you guys get together to form Wolf People?

Jack: Me and Tom grew up in the same village and have been in bands and made music together for about 15 years, we made hip hop instrumentals for a while which got us into record collecting, which then opened up a world of psych, folk, Jazz, prog etc and we eventually started getting into playing instruments again.

I made most of Tidings on my own then formed the band to play the songs live. At first we didn’t know what we were doing but the band has grown up out of that, writing more material and trying to improvise more. The next record has more input from the band, more like we are live.

Where are you based?

We try to cover as much of England as possible. I am in the dead centre of the Country in Bedfordshire, Joe lives in North Yorkshire and Tom and Dan live in London.
We play all over England and rehearse in London and Bedfordshire so you could just say we’re based in England.

Whose idea was it to abandon the standard album structure of 9-12 songs of similar length & use the interesting structure of songs broken up by fragments?

When we joined Jagjaguwar they were really keen to re-release songs we had put out before on singles and EPs but I wanted to make it slightly more interesting for those people who had already bought those singles.
I love the first few Mothers of Invention albums because of the oddball edits and fragmented songs so I was aiming for that free sounding cluster of odd sounds and samples. I wanted it not to flow too smoothly and sound like what it was: a sketchbook of home recordings.

Who or what do you think inspires you as artists?

I found it a lot easier to make music when I moved out of London. Having access to the country and having time and space to think opened me up to writing a lot more.

We share a lot of music between the band. Tom always seems to be finding some amazing record that informs my listening habits for the next few weeks. Most recently Mikel Ramel and Flasket Brinner.

What are you listening to these days?

Mikel Ramel and Flasket Brinner ;). Going through another Beefheart phase. Mighty Baby - Jug of Love. Dark - Darkside. Nic Jones - From the Devil to a Stranger.

What gear do you use? Anything out of the ordinary? What guitar are you playing to get that identifiable sound?

On the Tidings recordings I used anything I could find, usually adding other instruments to guitars for lead melodies. I think I used a glockenspiel, a thumb piano, sitar, piano. I couldn’t afford to buy any effects or instruments so I just used what I could find or borrow. I would usually sample all the notes and play them back with the MPC, that’s what I did with the piano.
The guitar tone for the majority of that record is a 90’s Epiphone SG through a tiny harmony amp recorded onto a cheap domestic mono tape recorder. Sounds cheap but it's got heart, I think. I didn’t have a bass either so I just down-tuned the guitar for the bass parts.
Tidings is basically home demos but I knew I’d never better the feel of them because for the most part the performances are the first and only time I played them. I would run over the parts only until I had something I liked, record it, and move on. It’s a fun way to make records and one I’d like to return to.

Have you been touring around the city, country, anywhere else? Any place you'd like to end up? Been to NY yet? If so, want to come back?!

We play around the UK quite a bit. Basically playing anywhere that will have us. We’re looking forward to playing in Europe and we can’t wait to get to the US. We are trying to be patient, waiting for the right time for us to come over, most likely when the next record comes out.

For those of us already in complete love with Wolf People's Tidings, their next record, Steeple, has just been finished and will be due out this coming October. A big thank you to Jack Sharp for doing this interview: fans from all over the globe wish you the best and thank you for your music!

Tidings is available on iTunes, and through Jagjaguwar Records.
Posted by Terri at 10:44 AM 3 comments:

Fans of psychedelia: Chris Bruno, of Sophomore. Peacock, brings you a trip for the visual and aural senses, right here:

Labels: Sophomore. Peacock music for short film Mindscape
Newer Posts Older Posts Home
Subscribe to: Posts (Atom)
This blog's sole purpose is to bring some well-deserved publicity to new or less-known artists who fit the bill of 'new psychedelic, shoegaze, experimental, folk, and garage rock' music, through videos, links to MySpace pages and Band Camp pages of the artists, gig reviews, and through interviews with, and information about, the artists themselves. It is dedicated to Black Market Karma. Their music made me want to shout about it from the rooftops. But today, instead of rooftops, we have the internet & blogs, yeah.