Ah, I wanna move to London NOW!!! Yeah, I wanna see these guys live. Here's a video of a recent gig of Black Market Karma in LONDON:

Psychedelic Circus, an introduction (and a review, and an interview) 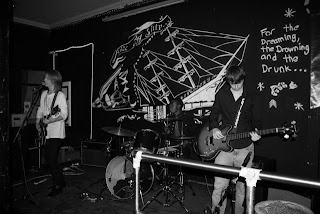 London-based band, Black Market Karma, have released their first EP. The 3-song disc is titled Psychedelic Circus, an introduction, and it is the band’s lovely and alluring way of getting a bit of their music into your psyche. Take What You Get is a beautiful, almost melancholic, ballad that proves this band has feeling, and can compose a song that evokes musings on one’s special place in life and being aware of the good things surrounding us. This song gives voice and music to the feeling of loss, and missing someone. It’s Gone is a slow-burner in the psychedelic fashion: rolling drums lure you in, swirl-y guitars wrap you up, and moody vocals guide you through the journey of the song. At times, a guitar on It’s Gone sounds like raindrops, on top of the tin-roof-drums, on top of the watery undercurrent of guitar. The closer of this debut EP, The Fall, picks up the pace to a Black Rebel Motorcycle Club-Baby 81-style frenzy of growling, dirty guitars and fierce drums, with vocals that are equally fierce and just angry enough to get the lead out. Fierce and frenzied, loud and rocking, The Fall ends abruptly and I am left wanting more, more, more....

Music connects the artist to the rest of the world, bringing its creators into our hearts and minds, and sometimes our soul. When the motives of the musicians are true, their talent shines through their compositions, and the listener gets the intended effect. Black Market Karma shine on this debut EP, and this is only a hint of great things to come.

Recently, Black Market Karma guitarist and vocalist, and all-around great guy, Stan, was kind enough to answer some questions for me. I owe him a million thanks for taking the time to do this insightful interview!

How old are you and how long have you been making music?

We're all 18/19 and we've been making music together for around 2 years now. All of us have been musically connected in someway since our early school days but only reasonably recently have we started to find our sound and our place together as an outfit. I personally have been playing the guitar and trying my hand at my own music since I was thirteen. Since then we've all been flitting in and out of different "bands" together but it's a really cool thing to finally be in a solid group and to feel right with where it's going musically.

How did you meet and form a band?

We all met in our school days. Our year seemed to be unusually musical with a lot of young kids who could really play already and because of this there were always a big amount of bands forming. Members kept changing, starting "rivalries" and through that we ended up with a band all of our own. Dami didn't join us until college years and this is when we (edit: WE is Stan, Mike, Dami, Josh) started to really settle together and everyone was finally on the same plane muscially.

I would say the goal of independent artists like yourself is to use music, recorded & live, as your creative outlet, expressing how you feel about yourself, others, and the world in general through songs. What are your thoughts on that subject: your goal as an artist?

I just wanna get the music out there and heard as much as I can. If people connect with the songs and what they're saying and it makes them wanna come see us live then that's great! We just wan't people to enjoy it. If one of our songs can give a person goosebumps then that's enough for me. I think that's the point when you know you love a song. Ultimately we wanna be able to make our music without restrictions, within reason. To have control over how we sound and not have to do something we aren't comfortable with! We want to make our music with integrity and respect but make enough money to keep it going!

What cities in what countries would you like to build a fan following so you can go play there?

If I'm honest, anywhere that we can! I love the idea of travelling around the world and bringing your music with you. I would like to be able to play in New York and have enough of a following there to do that. Japan has always intrigued me too, I think that would be a very cool place to go and play.

From what I know about you, you obviously make music because you are passionate about it. That seems to be the independent spirit. Do you encounter other musicians of the same mindset? Do you feel there is a surge as this decade progresses, in the number of musicians who get into the business to do it for themselves, and keep control of the creative aspects of their music?

Definitely. I've met a lot of people who say that it's more important to them that they keep creative control and feel happy with their music rather then bend to some suit's whims because of something they signed! I've noticed that more and more bands are making it on their own, without a record label. A good example of that is Elbow. They do it all themselves and don't have to answer to anyone. They have freedom in their music and enough success to keep it going. The thought of having to change what you're doing to fit guidelines is a bad one. I do think that the fear of "selling out" can also be taken too far the other way, to the point where you make desicions that will uphold your integrity but ultimately ones that are killing the music. Everyone needs to pay the bills!


Regarding the last question, do you like the idea of having a smaller fan following, but having those fans understand you and appreciate your music more because it is special and meaningful?

I think bands in that position, more often than not, are actually happier. I always enjoy gigs where the crowd is smaller and you can actually feel the vibes coming off stage, rather than gigs with an endless sea of people. It can lose its personal touch otherwise and all the "magic" seems to be sucked out of it. As an artist you want to get your music heard by as many people as possible, but I think it's quite a sad thing when it all gets bloated. I think this is why people seem to gravitate to a band more when they love the music but they aren't massively succsesful or famous. It's good to be able to actually SEE the band when you go to a show. When you find music you really connect with and it's being made by people in that position it gives you the feeling that you've found something real special. Like you can almost claim it. I like that idea.

Do you feel your music comes from your heart and soul? How does it make you feel when you write and play music?

Completely. When I'm writing a song a piece of me goes into it almost. It's like if you're experiencing a bad time and you put it into words and music it feels like closure, kind of. I feel lucky that I'm able to do that. It's a really good feeling. It can be kind of surreal when you start playing and a whole song just comes out real quick. It's almost like it wasn't you doing it. Being on stage and playing live is the one time where I feel right and you forget everything else. I think a lot of people would say that they feel the same way.

What kind of guitars and amps do you use, or would you like to use?

Well, I use a an old 70's Gibson es 345 guitar and a Vox AC30 amp. Mike plays an Epiphone Casino through a fender tube amp and Josh plays an old 60's Epiphone Rivoli bass through a distorted Laney. I like to mess around with effects like Rotary sounds and wah pedal and I always use reverb with my guitar. I love the roomy, atmopsheric textures you can create with it. If I had the money I'd probably buy a Fender Twin Reverb amp and a Vox Ultrasonic guitar. They were only made for a year though so that may prove difficult. In Josh's dream world I think he'd like his bass in red.

I'd like us to have enough of a following that we can travel the world and play most places to a decent crowd and to make enough money that we can keep touring and making albums. We wanna write and record as much music as we can but not to the point where we're rushing just so that we can say we have another album out! Our aim is to keep the music consistent and fresh and make it with integrity and respect for what's already been.

Thanks again, Stan. Pulling Shapes gave me goosebumps, first time I heard that song. I know exactly what he is saying! Anyone got a lead on a Vox Ultrasonic for him?!!! Email us with any info.....!!
Posted by Terri at 10:58 AM No comments: Audn is a four-piece band based in Brooklyn. Stephan plays guitar; Matt plays bass; Jessie plays drums; Sabrina sings. After seeing them perform twice in tiny, simple, intimate venues, I truly think they have struck the perfect balance of spacey atmospherics, and down-n-dirty vibes. By that, I mean the guitar and vocals combine to create the layers of space and unique airy sounds shoegaze music is known for, and the drums and bass combine to form a just-dark-enough undertow. These highs and lows come together in the middle, and strike the perfect complement, on waves of sound.

Anyone who gets the chance to go see Audn play should take that chance. They are a captivating live band. They should be recording songs to be released in the spring of 2009. I certainly hope so!

The songs they play live are:
Atmosphere (one of the BEST signature songs, ever)
World Is Flat
Give and Take
Self-Titled
Soon You'll Come Home

By the way, when I say Stephan plays guitar, I mean he does amazing things with that guitar. You have to hear it.
Posted by Terri at 3:29 AM No comments:

Make sure you visit their site to hear tracks in full and Stan's wonderful acoustic track It's A Long Way Down.
Posted by Terri at 7:16 PM No comments:

Newer Posts Older Posts Home
Subscribe to: Posts (Atom)
This blog's sole purpose is to bring some well-deserved publicity to new or less-known artists who fit the bill of 'new psychedelic, shoegaze, experimental, folk, and garage rock' music, through videos, links to MySpace pages and Band Camp pages of the artists, gig reviews, and through interviews with, and information about, the artists themselves. It is dedicated to Black Market Karma. Their music made me want to shout about it from the rooftops. But today, instead of rooftops, we have the internet & blogs, yeah.