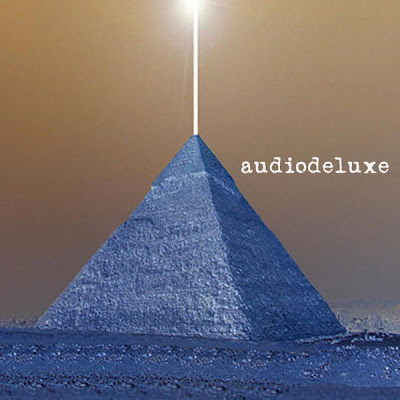 In true independent, DIY spirit, so beloved by this writer and music blog, Audiodeluxe is making some of the most intoxicatingly trippy electro/guitar music to come out of Scotland, or anywhere, today. Audiodeluxe is husband/wife duo Dez Bone and Sammy McHugh, who are combining their love of heavy guitars with electronic music to make their own music, reminiscent of late 80s/early 90s electro, but with a fresh, modern sound which most surely nods to the trip hop genre, a style I consider to be the height of great electro music. Also, feeling the vibe of legendary Depeche Mode, and being big fans of that pioneering electro/guitar band, Audiodeluxe are writing and recording, all themselves, songs that melt the mind, and make you sway, easing back into your seat, with a drink, a smoke, and a smile......

A bit of insight into the band's inspirations and what they are up to in their neck of the woods, from Dez himself:

Who are the members (is it just you & Sammy)and who plays what?
Sammy: vocalist, lyricist.
Dez: guitars, and any other sounds that that aren’t vocals.
A Husband and Wife team which I personally think is the perfect music making partnership...the wife might disagree.

Where exactly are you based & what is the music scene like where you are? How do you feel you fit in it, do you like it, is there a creativity felt & seen throughout where you are? Is there an inspiration for you there?
We’re based in the village of Moodiesburn just outside Glasgow; there is a thriving music scene in Glasgow however, I’m not sure we fit in that well with it. It’s geared more toward guitar lead bands or the occasional full on electro outfit because they are the in thing at the moment, and we sort of stand on our own doing what we do.

Where do you find your main inspirations from (other musicians, artists, nature, anything at all that inspires you)?
Well the band that has had the most influence on us is Depeche Mode: we’re both massive DM fans. Radiohead, Rage Against the Machine, The Smiths, and the artist formally known as Prince (we don’t listen to him but we appreciate the fact he does what he does), are also in there somewhere. Month Python: the films and sketches (not the music) you can’t beat a bit of python style nonsense. Closer to home Sammy’s family are very musical and have had a big influence on my guitar playing; Sammy’s brother and I took up the guitar around the same time and had many a good night annoying the neighbours while learning play; and her sister is probably a better guitarist than us both. Also our bizarre circle of friends, the village we all grew up in and the various reprobates that populated it also had and still have a massive influence.

Are you recording for an EP album?
We sort of record songs as the ideas come to us: it’s a never ending process.

Do you perform a lot at local venues?
We play the occasional gig here and there not as often as Sammy would like as I’m more interested in working in studio and she’s a bit of a show off.

I think there a lot of people who would LOVE your style of music, which I think is trippy, ambient psychedelic style, trip-hop, if you will. Where should I direct people who are feeling the vibe of this style of music?
Our Myspace page should be the first port of call for anyone wanting to listen to our music or get in contact with us.

What are your plans for the band & what should we look for from you in the near future?
We’ve got a few new songs on the go, and hopefully a few gigs to showcase the new songs.

Trip hop and guitar/electro music fans, rejoice, and check out what Audiodeluxe are doing to perhaps help you relax, get lost a bit, ease off the stress, forget the mess, end the day easy........you get the idea. I think you know what I mean. It's what music is all about to people like us. Dez, thanks for introducing me to your music and doing our little interview, cheers & love!!

Check the band's YouTube channel for more trippy visuals and tunes.
Posted by Terri at 1:55 PM No comments:

Labels: Audiodeluxe, interview, Scotland
Newer Posts Older Posts Home
Subscribe to: Posts (Atom)
This blog's sole purpose is to bring some well-deserved publicity to new or less-known artists who fit the bill of 'new psychedelic, shoegaze, experimental, folk, and garage rock' music, through videos, links to MySpace pages and Band Camp pages of the artists, gig reviews, and through interviews with, and information about, the artists themselves. It is dedicated to Black Market Karma. Their music made me want to shout about it from the rooftops. But today, instead of rooftops, we have the internet & blogs, yeah.