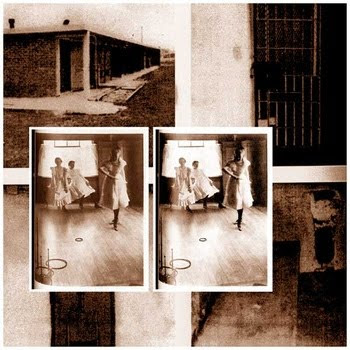 From Austin, Texas, Bloody Knives is a duo, Preston and Jake, who have released an album, called Burn It All Down. Burn It All Down is absolutely certain to be on my personal list of BEST OF 2010. Citing influences such as practically all the deadly sins, and many more descriptive terms from the dark and evil things in the world, Bloody Knives has created a vibe with their music, made from guitar, synth, and driving percussion, that feels so damn fantastic to get lost in......the entire album from start to finish, is like one long wave to ride; it's exciting music, makes you feel like you're underground riding a fast, dark train. The evil imagery might be there, yes, but the music is not grating, or harsh, in any way. Instead, I can honestly say there is an actual 'lightness' about this music, which has nothing to do with anything pretty or mundane, and everything to do with Preston's vocals, which are not buried within the music, but stand out as they are sung over and above the driving, pulling beats of drums and the smooth sweeps of synths. The guitars are what bring the darkness and depth, so constantly there is this interplay between light and dark in these songs. Bloody Knives music most definitely pulls elements from a multitude of different musical styles, from shoegaze, to post-punk, to electro, to psychedelic. These guys masterfully meld all of this together to create a most mind-blowing piece of work.

See the band's Band Camp page HERE, listen to Burn It All Down in full. That is a full-service Band Camp page where downloads and CDs to purchase are available. Also listen to their self-titled debut EP, on the right side of the page (equally mind-blowing as the album). Take advantage, friends, the CDs are limited edition. ***Mine is on its way.

***After being the owner of Bloody Knives' complete catalogue of recordings for a few weeks now, I have to say, this is more than just incredible music. When you order the CDs from the band themselves, what they send you is not JUST a CD. All CDs and accompanying artwork are made by hand, and they are exquisite. Splashed with dark paints, lyrics, and disturbed old photos that are devilishly captivating, the entire package a collector's item. Follow the links from the band's Band Camp page, given above, to get your copies of the album and EP.
Posted by Terri at 12:24 PM No comments:

Labels: album review, Band Camp, Bloody Knives, Burn It All Down
Newer Posts Older Posts Home
Subscribe to: Posts (Atom)
This blog's sole purpose is to bring some well-deserved publicity to new or less-known artists who fit the bill of 'new psychedelic, shoegaze, experimental, folk, and garage rock' music, through videos, links to MySpace pages and Band Camp pages of the artists, gig reviews, and through interviews with, and information about, the artists themselves. It is dedicated to Black Market Karma. Their music made me want to shout about it from the rooftops. But today, instead of rooftops, we have the internet & blogs, yeah.