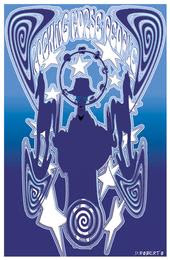 Rocking Horse People is a band from Los Angeles. From what I can see, they are very much under-the-radar, but completely up my alley. I seek out bands who are active today but sound like yesterday. I love bands who are all about that sunny psychedelic vibe. Rocking Horse People is one of those bands. The few songs I have found by them are all fantasticly jangly, bright psych/garage rock. I think it's safe to assume they do not have an album out yet, and only play gigs around their homebase of LA, but I will be the first in line if they do put together an album. Rocking Horse People have contributed a song called Lost In The Haze to the amazing compilation All In The Mind; a song called Already Dead to the follow-up compilation in that Psyilocybin Sounds series, Turn On Your Mind; and a song called Cirlce Gets The Square to the third in the series, Open Your Mind. They currently have two brilliant little gems on their MySpace player, called Piano Song, and On and On. I have managed to find a few more songs by Rocking Horse People, and needless to say, I was excited, as those songs are just as lovely as the songs on their player and on the compilations. I hope to hear more about this band, and more FROM this band, soon. Keep rocking, Rocking Horse People, and know that you have already have a big fan in New York!
Posted by Terri at 6:34 AM 2 comments:

Labels: All In The Mind, Open Your Mind, Psyilocybin Sounds, Rocking Horse People, Turn On Your Mind

The video for the as-of-yet-untitled song which will be on their forth-coming album:

The Young Sinclairs at Pianos, NYC 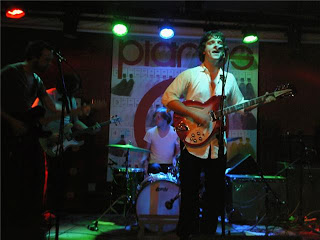 A more-than-perfect opener for The Lovetones, The Young Sinclairs not only impressed me, but won me over almost instantly as a new fan. This extremely talented young band plays a kind of retro-style rock and roll that seems to be making a resurgence with some artists I follow and admire lately. The Young Sinclairs have a name that brings to mind a decade past, and they have the songs to back that name up. With the familiar & enticing twang of a Rickenbacker filling the room at Pianos, The Young Sinclairs began their set with a song called Keep Them Paul, which like all of their songs, is a short one, and a bloody brilliant one. Since their songs are all around three minutes long, they got to play 12 songs for us and I fell in love over and over again with each song they played.
The Young Sinclairs are a five-piece band from Roanoke, VA, and are also members of a music-and-art collective called The Magic Twig Community. I mention this because John, the band member I spoke with after their set, told me that the guys I just saw perform that jangly, twangy, early 60s-style guitar rock and roll were all part of different projects back in their home base of Roanoke. This particular grouping from the collective, The Young Sinclairs, features John, Sam, Jonathan, Sean, and Daniel. By only reading the song titles, you might get the idea that these guys are a bit combative: titles like Push Down On You, I'll Get Even, and Tough Face may seem out of place for the actual sound of the band. But these songs are short and sweet, melodically strummed, and lovingly sung (much of the time in harmony). Songs are also accented with keys from a Moog.
Since their set was so much fun, I bought 4 of the whimsically-decorated albums The Young Sinclairs were selling (for a newer band, they certainly have recorded a lot of albums): Feel Bad, Tough Face, Indian Winter, and O Bummer. They will be for sale on The Young Sinclair's MySpace page very soon. And if you live near NYC, catch them at Death By Audio on June 20, or Cake Shop on July 22.
Posted by Terri at 7:29 AM 1 comment: 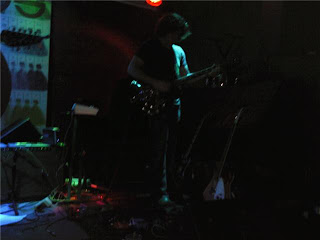 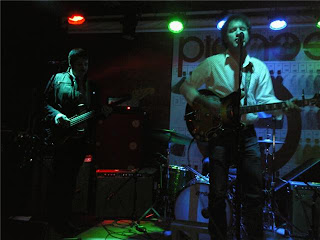 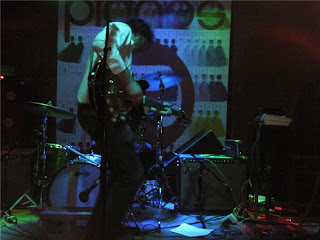 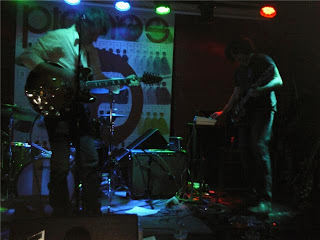 I adore The Lovetones. To have the chance to see them perform in front of me at Pianos, in New York City, was an enormous joy, and I should admit,
quite an honor.
The music of The Lovetones has reached the far corners of the world, and the four albums they have recorded and released since 2002 have made quite an impact. Matt Tow has a knack for crafting songs that may have identifiable influences (like say, The Beatles, or The Byrds, or Oasis), but retain their precious individuality. No Lovetones song sounds like another. Each is its own little four-minute-gem. When The Lovetones took the stage at Pianos and began playing Mantra, from their album Meditations, I felt a bit weak in the knees; it was just thrilling to see one of my favorite songs performed so perfectly right in front of me. When they played Wintertime In Hollywood, I got a bit choked-up: this song is simple in thought, yet absolutely stunningly composed. Wintertime In Hollywood is someone saying 'I'm far away from you now, but only in miles, my love.' Rob Campanella played the slide guitar on Wintertime, and seeing him up there playing guitar and keys for The Lovetones was almost unreal. These guys are amazing musicians, just a joy to watch.
The Lovetones' full setlist for the night was 14 songs long, and included most of my favorites from their catalogue; however, due to time constraints, they had to cut it down to about 9 songs. Matt Tow and the band did get to extend a few of the songs; the jam on Navigator gave me chills. Love and Redemption, Inside A Dream, Everybody Hides Away, Journeyman, all played to perfection by Mr. Matt Tow (on a rare and obviously-cherished Vox Ultrasonic), Mr. Rob Campanella (on 3 different guitars, including ANOTHER Vox, and also keys), Mr. Matt Sigley (on a Fender bass & also on keys & vocals), and a phenomenal guest-drummer (I unfortunately did not catch his name).
I will go on record as saying The Lovetones were the BEST band I ever saw perform. I wish them the best for the rest of their tour, and once again I tell them: You are loved in New York, and thank you for coming here!
Posted by Terri at 6:33 AM 3 comments:

Labels: Matthew Tow, New York City, Pianos, review, Rob Campanella, The Lovetones
Newer Posts Older Posts Home
Subscribe to: Posts (Atom)
This blog's sole purpose is to bring some well-deserved publicity to new or less-known artists who fit the bill of 'new psychedelic, shoegaze, experimental, folk, and garage rock' music, through videos, links to MySpace pages and Band Camp pages of the artists, gig reviews, and through interviews with, and information about, the artists themselves. It is dedicated to Black Market Karma. Their music made me want to shout about it from the rooftops. But today, instead of rooftops, we have the internet & blogs, yeah.