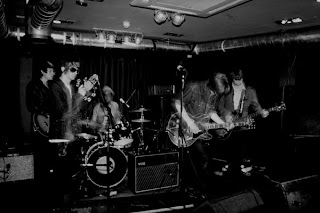 About a year ago, I heard a song called Pulling Shapes by a new band from England, called Black Market Karma. That song, and the companion song they had set to play, called It's Gone, were like nothing I had ever heard before. And even though I still love those songs like no others, Black Market Karma has come a long, long way since then.
I wanted to know what Black Market Karma have been up to this past year, and Stan, their singer and guitarist, was kind enough to let me know. Here are his answers to my latest ten questions:

You have a new member in the band now? Who is he and how did this come about?
Yeah, Sam’s just joined and we’re a 5 piece now. We’d been looking to get a new member for a while. We like to get a lot of textures and sounds into our recordings, but we couldn’t quite pull off all the parts live without another player. We needed things like extra percussion, keys and also a 3rd guitar on some tunes. Sam’s been a good friend of the band for a while now and he’s a good musician. I was jamming with him one day and it just clicked in my head; “Why don’t we get him I the band?” We broke him in with 4 gigs in 3 days and that was it. He fit in with us instantly, it’s been pretty cool.
I have seen all of the videos you post on YouTube. Are all of these songs recorded for your upcoming album?

Yeah, pretty much all those tunes are recorded / half way done or “to be recorded.”

How is the summer festival tour going? Which festivals have you played? Which was your favourite?
Summer’s been ace. So far this year we’ ve played Create festival, T-fest and Lounge on the Farm. We had a great time at lounge, proper good fun. We turned up on the Friday and camped till Monday morning, playing Sunday evening and just generally digging the festival lifestyle in-between. We were buzzing all weekend and the gig itself was top drawer, got a real good turn out. We’re looking forward to being on the bill for that again next year. As for this year we’ve got one more festival this weekend which is a Woodstock 69 tribute just outside Paris and we’re all pretty psyched about it. There’s a truckload of 60’sesque bands heading down so it should be awesome.
Whom have you been gigging with?
We’ve been all over the shop with gigs, and to be honest I forget most of the bands we play with. One group that stood out for me were Daylight Frequencies, the Horrors' new tunes were good too when they played at LOTF. The Pale Blue Eyes are another good band too.
How is the song-writing, the recording, and the production of your music going? Is the debut full-length nearly ready to be released?
It’s going swimmingly. We’ve got around 2 and a half tunes left to record so it’s on track! Once we’ve got the artwork sorted we can send it off to be pressed and we can start getting it out there.
It seems you have had a pretty exciting year! How has this past year shaped your music?

I’d say doing so many gigs has changed the music a bit. When you’re playing the same tunes every night you start to improvise to keep it fresh and some really good stuff has come from that. All the sound-checks have given us time to jam together too and a few new song ideas have come out that way.

Dami is quite a dancer. Did he train professionally?! Who else in the band can dance like that?!
To be honest, I think he just looks at himself in the mirror doing dance moves and that’s where that came from. I can’t dance for shit. The only other guy that could have the potential to dance is Sam, cos he’s half Spanish. It’d be cool if he could Flamenco Dance, but I ain’t seen evidence of it yet.
What guitars have you added to your collection lately?
We recently trekked it to Manchester and picked up an Epiphone Elite Riviera 12 string guitar (I think that’s the full name). It sounds mega and we’ve already used it live a few times and on the new recordings. It’s a beast.
What bands would you faint if they asked you to be their touring partners for the next 3 months?

I’m not sure I’d faint over anyone really, not my style! I’d love to play with the BJM or Black Rebel though. I reckon we’ d go down pretty well with the Warlocks or the Black Angels, too? If the Velvet Underground were still about, that’d be awesome, ha!

What do you have planned for the rest of 2009, and looking even more forward, for early 2010?
The initial plan is to get the album finished and out there. After that we’re just gonna plug it everywhere and get it heard as much as possible. We’ll see what happens!

Thanks for taking the time to update us, Stan. Keep on, you've got a lot of fans waiting for that album!

Labels: Black Market Karma, interview, We Are The Ones 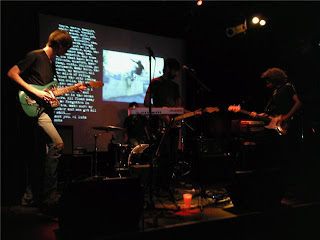 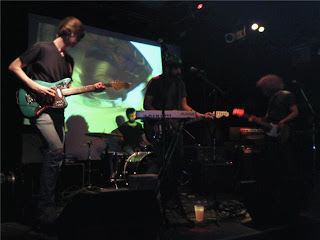 Oblisk, a band from Detroit, Michigan, has released their second album, titled Weather Patterns, and are in the midst of touring to support this amazing piece of work. I got the chance to see the band perform in Brooklyn at one of the best small places to see live music, Public Assembly. I also got my copy of Weather Patterns, which is now on heavy rotation.
Oblisk's debut album, 2008's Tune In/Tune Out, was a ride through back streets, late at night, not knowing what lay around the dark corners, feeling a bit nervous to find out. The songs had a jittery quality paired with vocals that were a bit moody and hollow, just enough to make you wonder what the ghosts were, and this made for an engrossing debut album. Now with Weather Patterns, Oblisk keeps some elements that are signature: the deep, ghostly vocals and the themes of situations unknown and a bit dangerous and disturbing, but the instrumentation has grown to include layers of guitars that create waves of sound that swell to intense highs. The drumming is tighter, less skittish now, and the bass lines, though also retaining a signature Oblisk sound, are deep enough to be the undertow you must watch out for within those waves. On Radar uses some shoegaze-style-guitar feedback perfectly. Epicenter picks up the pace to a frenzy of post-punk style guitar, reminiscent of Wire. Silent Passenger utilizes the undertow of bass to carry the song, which tells of a chance, and of course, possibly dangerous, encounter with a stranger. The psychedelic reverb of the guitar on Overcast is perfectly paired with a choppy drum that stomps its way through the song.
Oblisk live is something you should see if you live near the cities along the Eastern half of the U.S. where they are currently touring. On Radar, Tunnel of Phoenix, and Overcast are phenomenal live. Nick Baran's an ace guitarist, really something to watch. Check out Oblisk on MySpace to see if they are coming to a city near you, and buy Weather Patterns. If you liked Tune In/Tune Out, you will really love Weather Patterns. The production is tops (album was produced by Isaac Betesh from House Of Fire), the songs are guitar-heavy trips to nowhere and back, and the CD artwork is simple, yet perfectly represents what this album is all about (very nice work, Dave).
Posted by Terri at 12:13 PM No comments:

Labels: album review, gig review, Oblisk, Public Assembly, Weather Patterns
Newer Posts Older Posts Home
Subscribe to: Posts (Atom)
This blog's sole purpose is to bring some well-deserved publicity to new or less-known artists who fit the bill of 'new psychedelic, shoegaze, experimental, folk, and garage rock' music, through videos, links to MySpace pages and Band Camp pages of the artists, gig reviews, and through interviews with, and information about, the artists themselves. It is dedicated to Black Market Karma. Their music made me want to shout about it from the rooftops. But today, instead of rooftops, we have the internet & blogs, yeah.