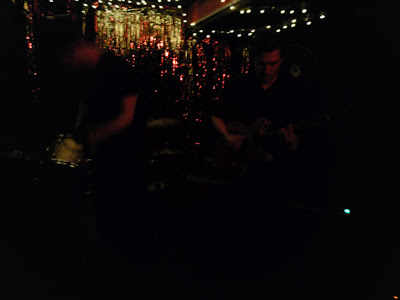 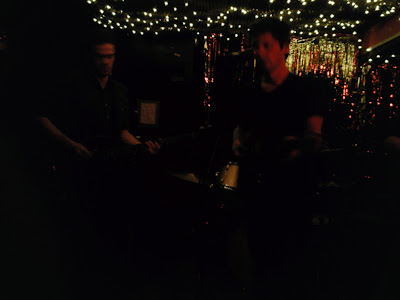 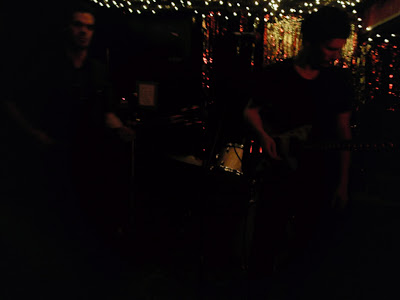 First off let me apologize for my lousy photos, as I was having trouble making my camera work on this night, but I still like to post a few of my own photos when I review a band's live performance for this blog! So apologies, now on with the review:

A good friend and huge fan of great music turned me on to Disappears music early last year, when their first album Lux came out. Lux quickly became one of my most-played albums, one that I always go back to, no matter what else I have been into at the moment. Lux has a quality that transcends your average guitar rock album. Disappears songs are most definitely of the post-punk style, an angular, tense, less-is-more style of music where the lyrics are more 'sharply-said' than sung. Brian Case and his extremely talented band mates have crafted songs that use strong, complex bass-lines and drums to carry hollow-body guitar reverb and sharp, quickly-delivered lead guitar and vocals, up to some serious heights of post-punk greatness. Disappears songs are full of swagger and attitude, and much of their music is down-right sexy. Disappears second studio-recorded release (they released Live Over the Rainbo shortly after Lux last year), called Guider, is a 6-song EP clocking in at 31 minutes, with half of those minutes being the final song Revisiting. Guider carries on what Lux began: Disappears exploration of guitars used as instruments to measure both space and time, with the bass and drums used to build the track that will run you into the WALL. It's quite a ride indeed.

The chance to see Disappears play live at tiny basement venue Cake Shop on Manhattan's Lower East Side, was not something I wanted to miss. To say they exceeded my expectations is an understatement. The qualities I hear and feel when listening to their recordings were amped to the maximum: the swagger, the attitude, the tension, as these guys are so at the top of their game, it's gotta be heard in person to be believed. I felt like they were all four (Brian, Jonathon, Damon, and new drummer Steve) playing off the same brain, like they were all coming from exactly the same pinpoint in space and flowing out in all different directions, yet the sound is still tight as can be. It's really hard to explain, except to say that it sounds like they have always been playing these songs (most of the songs off Guider, 3 songs off Lux, and 2 songs that are as-of-yet-unreleased), forever. And it's not like they are using new tricks, it's that they each have their separate parts that they meld together so seamlessly and effortlessly, so each song is its own perfect post-punk creation. Disappears live is not to be missed, so check their 2011 tour dates for a place near you, both in the US and Europe. Disappears: they love what they do, and it shows.
Posted by Terri at 3:01 PM 3 comments:

Labels: Cake Shop NYC, Disappears, live review
Newer Posts Older Posts Home
Subscribe to: Posts (Atom)
This blog's sole purpose is to bring some well-deserved publicity to new or less-known artists who fit the bill of 'new psychedelic, shoegaze, experimental, folk, and garage rock' music, through videos, links to MySpace pages and Band Camp pages of the artists, gig reviews, and through interviews with, and information about, the artists themselves. It is dedicated to Black Market Karma. Their music made me want to shout about it from the rooftops. But today, instead of rooftops, we have the internet & blogs, yeah.