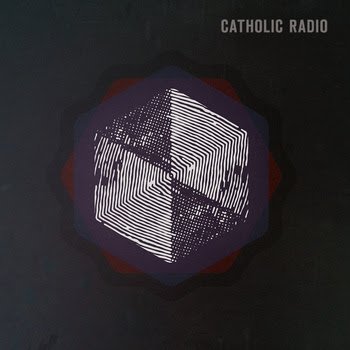 San Francisco continues to be a fertile ground, indeed, for some of the absolute best music being made today. Recently brought to my attention, Catholic Radio is my latest discovery out of San Fran, California, USA. A four-piece, and a true rock band, Catholic Radio have a sound that is smooth and cool, with an air of mystery. Going back and forth between an edgier style of rock, and a dreamy, groggy, lighter side, Catholic Radio's recently released self-titled album is eleven songs of intricate, gorgeous guitar work that reminds me of the legendary Australian band The Church's sound, a beautiful style of playing guitar.
Led by Parker Moore on guitar and vocals, Catholic Radio is also comprised of Tyler on drums, Rob on bass, and Connor on keys but also playing guitar sometimes. Most of the songs on the debut album are just Parker playing guitar, but upon only your first listen, you'd be forgiven thinking there are multiple guitar parts within these songs. I have listened many times to the album, and when I asked Parker, much to my surprise and his credit, nope, for the most part, these songs are him on guitar and Connor on keys:
Terri: What kind of guitars do you use? You are 2 guitarists, right?
Parker: Just one guitarist (myself) on the album. My brother Connor is an amazing guitarist but has played keys w/ us up to this point, though is going to be playing a 2nd guitar in parts of songs for our new slate of shows & tunes. I mainly play an Eastwood GP, but used a strat and tele for a couple of parts on the album.....
Dreamy key sequences, and atmospheric guitar work make El Buen Sabor the big highlight here. I feel Catholic Radio have purposely made an album that follows through from one song to the next, with a flow to the vibe, but El Buen Sabor is a repeater, indeed.
I asked Parker about the music scene he and his band mates are a part of in their home city of San Francisco:
"The SF scene, it's in an interesting place right now, there's some really good music & bands happening in SF. We're tight and have gigged w/ The Actors, The Better Maker, Boy in the Bubble, Spiro Agnew, and are buds but haven't gigged yet w/ bands like Tokyo Raid, Sentinel, Cash Pony, etc. As with a lot of other major areas, the new folk/punk folk, garage/noise or electro-wave bands are pretty hot w/ the bookers. We like a lot of that sound, but it's not our style, so does pose a slight extra hurdle getting into some venues we'd like to play. End of the day, I think everyone in SF appreciates good music w/ a defined style, regardless of what's hot now, so we're just going to keep refining, writing, doing our thing – and see that momentum takes us."
I totally respect that point of view: there is so much room out there for different styles, and we want to hear it all! Catholic Radio's debut album is most definitely something different from what a lot of SF musicians are doing right now, and that is a great thing. It is a work with elements of psych, experimental, and post-rock, incorporating and embracing all of these styles of guitar rock, and keeping a smooth vibe throughout, from start to end. Check out the album, friends, and if you are in San Fan, go see them play! Too bad I'm in New York!

Listen to the album in full on Band Camp.
Posted by Terri at 5:50 PM No comments:

Labels: album review, Catholic Radio, Parker Moore, San Fransisco
Newer Posts Older Posts Home
Subscribe to: Posts (Atom)
This blog's sole purpose is to bring some well-deserved publicity to new or less-known artists who fit the bill of 'new psychedelic, shoegaze, experimental, folk, and garage rock' music, through videos, links to MySpace pages and Band Camp pages of the artists, gig reviews, and through interviews with, and information about, the artists themselves. It is dedicated to Black Market Karma. Their music made me want to shout about it from the rooftops. But today, instead of rooftops, we have the internet & blogs, yeah.