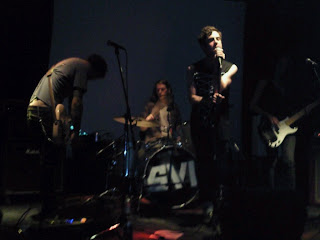 Well I have in my hands, and in my stereo, the 'advance limited copy' of Soren Well's first EP, and this is a real thrill. The music Soren Well has been honing during the recent months, has taken on life, and formed an expansive, explosive sound that already impressed me when all I had was the songs they posted on their MySpace player. I found their MySpace page while searching out New York City bands who play gigs with other bands that I know and love. Since I was really enjoying those songs, I made it over to see Soren Well play a gig that was almost a one-night shoegaze/noise-rock fest at Public Assembly in Brooklyn (on June 27, 2009): six bands playing from 7 pm till 1 am, all big-guitar-effects bands who can blow your mind with their intensity and creativity.
Soren Well play music that definitely can be described as shoegaze, but I also like to add to that sort of generic tag, that Soren Well have what bands like The December Sound and A Place To Bury Strangers have: a way that they layer their guitars and vocals that gives their music a slightly darker, shivery feel. There is a haze of gauzy guitar in the background, with the lead guitar topping the songs with the defining highs. Throw in some excellent, powerful drumming, and some vocals, that not unlike Zack Sarzana's from The December Sound, sit just atop the highs of the lead guitar, and you have a set of songs that are sometimes hypnotic, sometimes a bit evil, always intriguing.
The six songs on Soren Well's self-recorded, self-produced, and self-distributed debut EP are pure bliss, a necessary fix for a shoegaze addict like myself. After begins the set of songs and gets slammed by the rumbling rhythms and wild guitars of Starry Eyes Gone Blank Tonight (quite a poetic song title), and Soren Well use that perfect pair of songs live, too, as their set closers. Two songs played live but not on the EP are Ghostbear and The Devil Is Always Winning, both fantastic. And don't let Soren Well fool you into thinking their music is of the sedative style, as you might think by reading their MySpace (influences: Ambien and Nyquil); rather, their music soars to some serious heights. Well, maybe Plaster will sedate you, just a little bit, but Black Transmissions will wake you right back up again, before Glass throws you straight into the wall. You'll love every second of Soren Well, I promise you that.

Labels: EP, gig review, MySpace, New York City, Public Assembly, Soren Well
Newer Posts Older Posts Home
Subscribe to: Posts (Atom)
This blog's sole purpose is to bring some well-deserved publicity to new or less-known artists who fit the bill of 'new psychedelic, shoegaze, experimental, folk, and garage rock' music, through videos, links to MySpace pages and Band Camp pages of the artists, gig reviews, and through interviews with, and information about, the artists themselves. It is dedicated to Black Market Karma. Their music made me want to shout about it from the rooftops. But today, instead of rooftops, we have the internet & blogs, yeah.