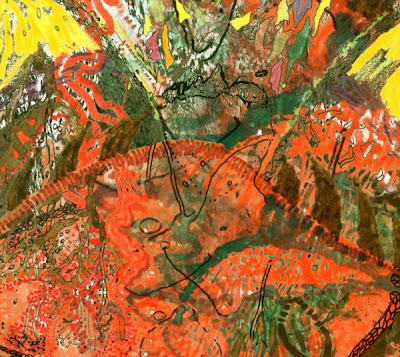 The Silents are a young four-piece band from Perth, Western Australia, formed around 2003, making music heavily influenced by The Beatles' psychedelic sound. Using a lot of jangly guitar riffs and garage rock-style choppy drums & rhythms, they released an album and two EPs with this style of retro, 60s-inspired sound. But their recent release, from earlier this year, called Sun A Buzz, sees The Silents taking quite an exploratory journey far above and beyond anything jangly and Beatles-inspired. This album is not only VERY psychedelic, it's highly creative and original, and completely engrossing (I can't stop listening). Many of the songs have a captivating swirl of sexy, evil vocals and guitars, and almost tribal drums. You can feel the concept at work here, a thread that weaves through the songs from start to finish, and this keeps your attention, as you get excited to hear where the song is going next. You can listen to four of the songs from Sun A Buzz on The Silents' MySpace player, and I suggest you do so NOW. Gone are the traits of their earlier recordings, which are fantastic in their own right, but left behind by the band to explore this fuller, richer, expansive psychedelic world of simply exquisite compositions. Please have a listen to The Silents, and enjoy it, my friends. I know you will.

An earlier song by The Silents, Nightcrawl:


The Snail, from Sun A Buzz:

Psychedelia fans, grab this one while you can. Get the download HERE as soon as you can, for it is only FREE for one WEEK (date of this post is 20 August) Helicon, New York loves you and thank you for this!!
Posted by Terri at 4:55 AM No comments:

Labels: Black Market Karma All That I've Made live in France
Newer Posts Older Posts Home
Subscribe to: Posts (Atom)
This blog's sole purpose is to bring some well-deserved publicity to new or less-known artists who fit the bill of 'new psychedelic, shoegaze, experimental, folk, and garage rock' music, through videos, links to MySpace pages and Band Camp pages of the artists, gig reviews, and through interviews with, and information about, the artists themselves. It is dedicated to Black Market Karma. Their music made me want to shout about it from the rooftops. But today, instead of rooftops, we have the internet & blogs, yeah.