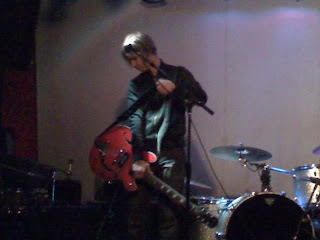 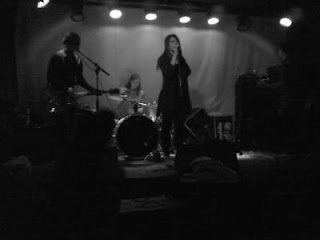 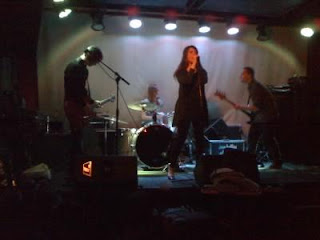 Atmosphere performed live: there is no better way for me to start a night of live music off than that song. Stephan's opening guitar riff is unmistakable, one of my favorite riffs ever, as it rings through Pianos' band space. I secretly wish that song could go on a lot longer, but all of Audn's songs are just fantastic to hear performed in front of me. Stephan is Audn's cheif songwriter, and probably one of the best young guitarists out there today. He is heavy into the New York City music scene, busy with Audn, dj-ing, and running Vanishing Point Studio as a venue for new bands and artists. Hopefully very soon, within the next few months, Stephan, along with drummer Jessie (she is amazing on drums), bassist Matt, and singer Sabrina, will be heading into the studio to record some songs for proper release. That's music to my ears. Audn's brilliant take on big shoegaze sound will not remain New York's best kept secret for much longer.
Posted by Terri at 4:18 AM No comments:

The Vandelles at Pianos NYC 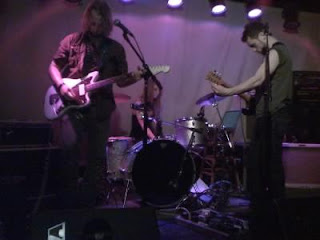 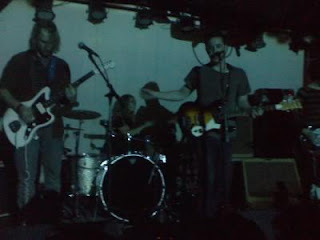 I have seen this band three times in recent months, so it is overdue that I write about The Vandelles, the ex-California-Coast kids, current Brooklyn darlings, whom I am thrilled to call fellow New Yorkers. Their gig at Pianos in downtown Manhattan showed me once again why I love this band so much. The Vandelles exude coolness. It's really as simple as that. They look cool. They play cool. Their songs are cool. They just ARE cool. For a band who has not released a full-length album yet, they have already gained quite a following, and have played support for fellow New York City guitar-abusers A Place To Bury Strangers, on New Year's Eve at The Mercury Lounge, no less. There is plenty written about The Vandelles, and their style of sand & surf rock & roll, but I'm sure a little more good press won't hurt.

There really is nothing to not love about The Vandelles. They have two hot chicks and two cool cats in the band. They take a style of good old guitar rock and give it their own modern roll. This is exactly what I was talking about to a friend, and fellow Vandelles fan, the other day: we love when a new band creates excitement for us by taking an old style we already love, and expands upon it. We love 'desert hell' and 'surf paradise' themes. I'm from the suburbs, but listening to songs that evoke the waves and the boards, I can't get enough. It's just a bit of escapism, I suppose......some good tunes can do that for ya.

So, The Vandelles, live, is a fun gig. Perfect combination of dash-n-dive, bomb-the-surf energy, and lovely-weather-style, hushed cool. They open their set with Bomb The Surf, then play a mix of old and new tunes, including Fever Of The Beat, Die For It Cowboy, and of course, Lovely Weather, which they have redone a bit from the recorded version available on their EP. I can't think of anything much cooler than catching a wave with The Vandelles, late at night, small club, big surf sound........excellent fun. Catch them live if you can.
Setlist (Thanks so much, Jason!):
bomb the surf
fever of the beat
get down
dash n dive
dead wave
lovely weather
swell to heaven
die for it cowboy
bad volcano

The Vandelles are part of Safranin Sound, and if you don't know what Safranin Sound is, check it now. You really need to support such efforts in integrity and creativity. 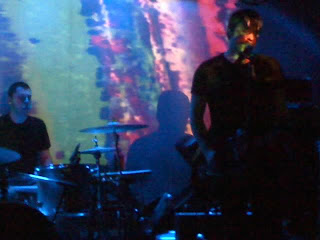 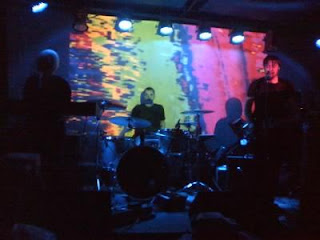 ...and blew me away with their live performance, this past Saturday night, at Pianos in downtown Manhattan. I only recently discovered this band. I knew I had to listen up when I saw Screen Vinyl Image was playing a gig with 2 of my favorite New York City bands, Audn and The Vandelles. Serendipitously, a friend sent me a preview of their new album, Interceptors, thinking of me when he heard it. He thought it would be my kind of music. Turns out he was spot on like nobody's business. I listened to the album and liked it straight away. When I listened to Screen Vinyl Image's earlier release, their 5 song EP called The Midnight Sun, I was even more impressed and a little stunned. These songs were from somewhere within the realm inhabited by artists such as Nine Inch Nails, A Place To Bury Strangers, Liars, and The December Sound. The songs come from a place, another world, where layers of synth and guitar distortion (from make-them-yourself pedals and equipment) form soundscapes that are deep and metallic. Each song pulses and brims with hypnotizing beats riding on waves of feedback coaxed out of evil guitars. Hollow, echoed, sometimes ghostly, sometimes whispered, vocals top Screen Vinyl Image's songs.

As I listened to the songs of Interceptors and The Midnight Sun, I got the idea that Screen Vinyl Image's live show would be exciting, and something different than what I had been experiencing from live music lately, which brings me to my review of their performance at Pianos, in New York City, on Valentine's Day, 2009. This gig was Screen Vinyl Image's New York album release party, and damn did they bring it on full force. With perfectly chosen wicked color schemes flashing on the screen behind them, the 3 members of Screen Vinyl Image, Jake, Kim, and Nathan, turned up the volume on the drums, keys, synths, and yeah, the guitar effects, to create a sonic escape to another planet for their entire set. They played What You Need, Asteroid Exile, Slipping Away, Fever, Decay (what a cover of a Ride song), The Midnight Sun, and closed the set with Cathode Ray. My hearing was now impaired, but wow, was it worth it.........waves of guitar effects, layers of smooth synthesizers, and pounding, industrial drums, roared under Jake's vocals, which could be the vocals of Ian Curtis's ghost............bloody amazing sonic assault. Definitely a must-see live band. And now, of course, their recordings mean all the more to me, as they haven't left the player since that night! They do indeed, worship the potentiometer.

The Lea Shores: These Charming Men 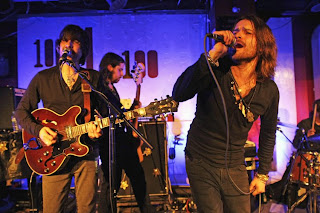 The Lea Shores on MySpace

If you don't know the UK's The Lea Shores, you need to take this chance to have a listen, and become a fan. My favorite song by them, called Rise (can be heard on MySpace link above), is a just-mellow-enough, lush, layered, melody with inspiring vocals that can hook you in an instant. The songs The Lea Shores have composed are nothing short of amazing. Beautiful harmonies sung by the Webb brothers (twins, no less) over dreamy guitar riffs, sometimes with a haze of violin in the backdrop, are what the songs of The Lea Shores are made of. For those of you who already know and love this music, read on for some fantastic information from Nick Webb, singer for The Lea Shores, who was extremely kind to answer some questions this rabid fan threw at him!


When did you form The Lea Shores & where does the band's name come from?

We formed about 4 years ago in under a railway arch in Peckham, South East London
We took the name from one of our favourite songs written by David Crosby for 'Crosby, Stills, Nash and Young' called 'The lee Shore'. It's a nautical term for a sheltered shoreline. We liked the idea of a place that can be close to but protected from stormy weather. Then changed lee to 'Lea' - to make it more pastoral and British sounding!

Who is currently in the band with you?

Where are you from & where is the band based?

I grew up in North London and Birmingham but now live in South London in Peckham - where all the band lives.

What got you into making music?

What are you working on now?

Releasing our album as a ltd edition 3xEP box set and writing and recording some new tracks that are blowing my fucking head off!

Are you playing any gigs soon?

Not for a while - we may book up some dates in April...

Whom have you played with (I have read the BJM amongst others, wow)?

Yeah, we toured with the BJM around Europe a while back which was great - apart from our bass player being hospitalised in Vienna after being beaten up in Peckham before we left! One of his broken ribs had punctured his lung and his chest had slowly filled up with blood on tour. Ricky from the BJM kindly stepped in to complete the tour. Our first gig without Gabs was in Stockholm where i first met Andy bell who became a good friend and fan of THE LEA SHORES - a mental tour - very much in the spirit of all things BJM...

Will you release an album this year?

Yes - but we'll have to be a bit patient!

Nick Webb, thank you so much for answering those questions, and I do hope the Lea Shores fans out there get to read them..........great information, indeed! We'll be impatiently awaiting the new album, trust me. Everyone I know who loves The Lea Shores is waiting!

Labels: interview, Leave Me On My Own, Nick Webb, Rise, Simon Webb, The Lea Shores
Newer Posts Older Posts Home
Subscribe to: Posts (Atom)
This blog's sole purpose is to bring some well-deserved publicity to new or less-known artists who fit the bill of 'new psychedelic, shoegaze, experimental, folk, and garage rock' music, through videos, links to MySpace pages and Band Camp pages of the artists, gig reviews, and through interviews with, and information about, the artists themselves. It is dedicated to Black Market Karma. Their music made me want to shout about it from the rooftops. But today, instead of rooftops, we have the internet & blogs, yeah.