The Flower Machine on Lavender Lane 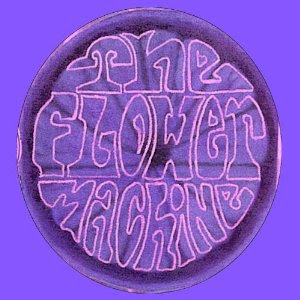 There is a new album out from our beloved sunny psych music-makers, The Flower Machine. It's called Lavender Lane, and it's just perfect. Lavender Lane is not completely new: it contains six new tracks mixed in among eight well-known and adored, remastered quintessential Flower Machine songs. Seven are from previous Flower Machine releases and the eighth remaster is from Trip Inside This House's Summer of 2008 gift compilation album, a little song called Traveling By Trampoline, one of my personal big favorites by The Flower Machine. If you know the music of The Flower Machine, then you know how Peter Quinnell's smooth vocal style, his whimsical lyrics, and mellotron-tinged melodies can enchant you in such a way as no other can. The pure charm & whimsy of the songs, their delicate, sunny vibes, can put a smile on my face when even the worst mood is upon me. How can you not love that? If you have not yet heard The Flower Machine, what the hell are you waiting for?! Go get Lavender Lane, set your tea, toss in a little sugar and spice, have a sip and listen to The Flower Machine. Relax, things just cannot be that bad, even for just a little while........

Now it's my pleasure and honor to give you one of the best reads you will have all year: to go along with the release of Lavender Lane, a little q&a with Peter Quinnell himself:

So, Mr. Quinnell, do you actually own a trampoline?

I don’t own one, as the building regulations are rather strict where I live. It’s a converted convent across the street from a park near Sunset Blvd in Silverlake, and a lot of the flats seem to be occupied by nuns still. I ran into the property manager at 2 a.m. the other night coming back from band rehearsal, and he clued me in to some of the things going on around here…deeply shocking. The pool area is apparently being used for love-cult rituals, and a bi-weekly swap meet where heavily tattooed people exchange incense and Hendrix bootlegs. That’s Los Angeles for you…

Describe for me your perfect day, include the season, and what makes a day special for you.

A perfect day would be waking up in a top-floor flat on the Rembrandts Plein in Amsterdam with $9,000 in travelers checks, walking up the Utrechtsestraat to Concerto and buying some impossibly rare vinyl picture discs from Luxembourg, then going out for drinks and reggae spliffs, and meeting some hippie girls who decide that I simply must come back with them for tea at their home, which would look exactly like David Hemmings’ pad in Antonioni’s 1966 movie “Blow Up” and have an analog 16-track studio that I could use indefinitely for free. Season? Preferably Autumn, but I’m flexible on that…


If you were to pick a bouquet of flowers for me from one of those 'pick your own bunch' fields, which would you choose?

21 purple Zinnias with one pink rose in the middle.

Let's go out for brunch, where shall we go & what shall we have?

The perfect brunch would have to take place by a lake in Central Park. It would be nice if there were swans too. The restaurant would have to have lots of tapestries and sitar music. Apple martinis to start, followed by tangerines suspended in mid-air and tiny squares of alpine milk chocolate arranged in a mosaic pattern on top of orange ice cream.

What music have you been listening to lately?

This is the part where musicians typically start droning on about how they only listen to pre-war blues or Bulgarian choral music to appear sophisticated – sod that, I say. I’ve been on a T. Rex jag lately – I put on my Italian red vinyl copy of The Slider, and it stayed on the turntable for 2 weeks straight. That’s probably one of the best records in the history of time. I’ve also been listening to demo recordings of Steve Peregrine Took …the Missing Link cd with Seventh Sign, Days, Syd’s Wine and Lucky Charm…incredible music with unintelligible lyrics recorded in a basement – the polar opposite of what his ex-bandmate Bolan was doing, but equally compelling, in a way.

The idea behind Lavender Lane was to take some older songs & remaster them, and mix them up with some new songs, right? I assume this was because The Flower Machine joined the roster at Rainbow Quartz? Who are some of your fellow label-mates now?

Something like that, although the chronology is rather more bizarre. We’d been on Microindie, a small label in Grand Rapids, for years and years. Toward the end of 2009, following some sessions in Ohio with my friend Todd Tobias, we for some reason simultaneously veered off into making a weird record that was sort of like a prog-rock science fiction opera that took place in 1951 called The Velvet Curtain. Brian Webster (keyboardist/engineer/co-producer) and I put the thing together at my house and dubbed all sorts of weird stuff on…one track was a 16-minute mellotron epic…just utter madness from a commercial point of view. We sent it to Microindie, and he was very nice about it and came out to LA for a couple of dinners, but I imagine he thought I’d gone a bit bonkers, and nothing concrete came of it. So I went shopping for a new label over the summer and sent out some discs. I was talking to an A&R person at Subpop for a few weeks, but then Rainbow Quartz’s president Jim McGarry rang me up from New York and wanted to do a 14-song album and rush-release it in November. That was incredibly flattering, and as it happens, RQ is the only label that has bands that I’m actually a fan of, such as Rockfour, the High Dials, The June…people we could relate to, in other words, so that was an easy decision. Jim then asked me to send over everything we’d ever done, so I sent him hours of material, and he spent most of a weekend plowing through all that and came back with some really sharp insights on what we were doing and how to present it…I was floored that he took the time to do that. I couldn’t be happier about how that all fell together.


Do you still have problems with neighbors swiping Netflix, or any other incomings to your postal box?

What have you been reading lately? Anything old & obscure & wildly interesting?

I’m reading the new Syd Barrett biography “A Very Irregular Head” after Syd Barrett’s nephew Ian recommended it to me recently. I’ve read the others, which in my view are rather one-dimensional, but Ian says this book nails it, and he’s absolutely right. Definitely the best thing written about Syd thus far, and unique in that the author spent a lot of time with Syd’s sister Rosemary, the only person close to him in the post-London years, so there’s quite a lot of new information and insight into Syd’s decision to withdraw from public life, and his perspective about being relentlessly hounded by journalists and door-steppers, which carried on till the day he died.

Have you met anyone worth mentioning lately?

A resounding “no” on this question. I recently went through a horrendous break-up with my ex-girlfriend, and wound up going on a few ill-advised dates, one of which involved being propositioned on a Hollywood rooftop at 1 o’clock in the morning by a girl who was literally falling-down drunk. I’m thinking of moving to Kansas to meet a nice farm girl, but there’s a train strike at the moment.

I wish I was in LA to see your upcoming performance at Spaceland. Who else is playing with you & are you excited for this event, record release party?

Quite looking forward to it, yes…Saturday, November 27th is just around the corner. I don’t know much about the other bands we’re playing with, but it’ll be our first show with our new drummer Mitch Ross. Mitch’s playing is like a cross between Ringo and Bill Bruford…fantastic player. Plus he’s only been in the band for two months, so he’s not all jaded already or hooked on heroin or anything…

What is next for you & The Flower Machine?

I’m writing a novel based on the 1918 Treaty of Versailles, which I hope to turn into a lawsuit. I’m also scribbling away for our next LP, which will probably be a concept album about a little-known event in the life of Suzi Quatro, involving a prominent minister in the Church of England and a pair of purple Perspex water wings.

Any tarts left? Shall I have some over-nighted to you from NY?? Do they have to be pineapple?

A few of the nuns dropped by to vacuum and dust the other day, and they ate all the pineapple tarts…very naughty. So, any tarts you’d like to send would be lovely. Pineapple, tangerine, candy cane, cinnamon, menthol…we’re not fussy.

Peter, thanks so much for answering my questions!

My pleasure – it’s nice to chat with someone one-on-one, as opposed to relaying things through trial lawyers…

I know, attorneys, I'm not into them either, too serious, everything is so complicated.......I prefer things simple & charming & fun, like Peter and his music. Thank you once again, Peter Quinnell, my best to you and The Flower Machine!
Posted by Terri at 1:47 PM

Outstanding! PQ is a rare bird these days: uninhibitedly funny and unabashedly unserious. It comes through in the music, too.
Try it!

I did a radio review for this album last week. Great stuff!

WHAT A GREAT INTERVIEW...OPEN..FUNNY..HONEST. I THOROUGHLY ENJOYED IT