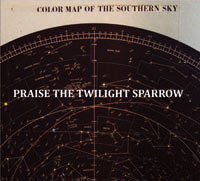 Praise The Twilight Sparrow caught my ear some time ago, when I discovered the self-titled EP, consisting of four of the most hauntingly beautiful acoustic songs I ever heard. This EP was released in 2007, and now, three years later, Praise The Twilight Sparrow has released a full-length album, Color Map of the Southern Sky: 13 songs, all stunning in their stark, soft, style of woodlands folk. Mostly acoustic, accented with banjo and harmonica, and all sung by Pascal Hallibert in his gorgeous signature vocal style (it's as if the wind is delivering the words through the trees in the dark), these songs are quietly comforting with their uncomplicated beauty. A few of Color Map of the Southern Sky's songs retain the mildly dark and haunting sound of the earlier EP, like the song H.Wood. And one song straddles both releases, the song South of No North. Songs like Mist on the River, Tales From the Dark Seas, Lady of the Snow, and the album's closer, Enter the Cold, conjure up images of a long, deep chill, foggy twilight, and an overall hushed landscape. Although I listen to this music any time of year, it definitely does lend itself to certain times (autumn and winter), certain places (misty lake houses, a forest of ancient trees reaching to the gray sky), certain feelings (lost love, found faith). Praise The Twilight Sparrow's music is quite certainly mood music, but when you are in the mood for dark, yet beautifully dreamy folk songs, there are none better to lead your way, than these lovely compositions.
Posted by Terri at 3:42 PM